Home About Some History

Unitarianism is of mixed origin and it is difficult to precisely determine the point at which the seeds of the denomination began to germinate.

Some would point to the fifteen century Lollards who followed Wycliffe in translating the Bible into English and developed a radical critique of Church authority.

Others suggest that origins can be found in the Renaissance ‘Christian Humanism’ of Italian reformers like Fausto Sozzini and Bernardino Ochino. Certainly the Socininanism their theologies initiated was immensely influential on the ‘Radical Reformation’ in Europe, and the terms ‘Socinian’ and ‘Unitarian’ were used interchangeably.

It is significant that, then as now, the term Unitarian refers not to a particular doctrinal position but to a perspective outside the mainstream of Christian orthodoxy. A perspective we are happy to maintain.
The upheavals of the English civil war and the interregnum afterwards created a space for the free flow of radical religious ideas between Britain and Europe.
When Royal authority was reasserted with the Restoration in 1660 many religious radicals were forced into exile, or retreat.
In 1662 2,000 clergymen were ejected from the Church of England because they refused to subscribe to the 39 articles of religion, ‘The Articles of the Church of England’ (which included acknowledgement of the doctrine of the Trinity).

Those clergy who were gifted preachers (and highly educated debaters) like Richard Stretton (MA oxon) tended to be followed by loyal elements of their former congregations and they sometimes established alternative communities – which is exactly what happened here in Leeds.

The 1672 Act of Indulgency conceded to ‘dissenters’ the right to worship and so this congregation began meeting publicly at Sibell Dawson’s house in Alms House Garth. Mill Hill Chapel in City Square was first built in 1674 near this Garth, and opened for worship on March 25.

The church was attended by historian Ralph Thoresby’s father. Richard Stretton was the first Minister and he and John Thoresby became early trustees of the Presbyterian Fund.

One of the most eminent of Mill Hill minsters was Joseph Priestley who was born at Birstall in March, 1733, into a weaving family.

He moved to Mill Hill in 1767, receiving a stipend of 100 guineas and a house. He lived in the minster’s house north of the chapel before moving to be with Lord Shelburne and preaching his last sermon at Mill Hill in May, 1773.

In 1774 he joined with Theophilus Lindsey in founding the first place of worship with the name ‘Unitarian’ at Essex Street in London. At this time radicals Thomas Paine and Thomas Jefferson both visited this new Church. The headquarters of the modern Unitarian denomination still stand in the premises Priestley and Lindsey bought.

During his time in Leeds his research led to the discovery of oxygen in 1774 and he also co founded the Leeds Library and the Infirmary. His statue overlooks the chapel from City Square and a chair in the chapel is said to have belonged to him.

The original puritan style meeting-house Chapel was showing signs of age and wear and a new building, designed by architects Henry Bowman and Joseph Crowther  to reflect the more orthodox theological ‘Free Christian’ affiliations of the congregation, was opened on December 27 1847.

The new building in Potternewton and Meanwood stone cost £7,300 and it opened free from debt with a congregation exceeding 1,000. During the ministry of Thomas Hincks schools were built on the site of the minister’s house. He also conducted the service in the new Hunslet Mission Room in March, 1863 (closed in October, 1966). Both developments reflect the denomination’s enduring concerns with education and social action.

During the Great War, Priestly Hall and school were adopted for wartime use from 1915 to 1919. In 1924 the chancel floor was laid with marble to mark the chapel’s 250th anniversary. The centenary of the chapel opening was held on January 2, 1949 and was supported with public meetings at which Sir Adrian Boult was one of the guest speakers. Throughout this period Mill Hill was commonly referred to as “The Mayor’s Nest” because of the number of holders of the Office who were members of the congregation

The north window of the chapel (Mill Hill is aspected North-South not East-West as is usual in more orthodox churches) was presented in 1912 remembering Sir James Kitson who died in March, 1911, and is buried at St John’s Church, Roundhay.

An east window remembers Ann Kitson, Lady Mayoress in 1860-1862 (she was Lord Airedale’s mother). This window (now partly obscured by a 1960’s staircase), designed by the William Morris company, includes panels depicting Mary Magdelen, Ruth and Martha which are designed by Morris himself. The lower left panel (pictured) depicts Dorcas and is by pre-eminent artist Ford Maddox Brown. It is one of only two copies in existence. 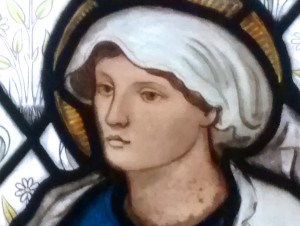 Another window remembers members of the Lupton family and Salvati’s mosaic reredos (behind the altar table), remembers John Darnton Luccock, Mayor in 1864.

There is also a window in memory of Francis Garbutt, mayor in 1847.

There are other memorials to Charles Hargrove, minister from 1872-1912 and to architect John W Connon or Bardsey who was chapel warden and, on the  east wall, an impressive roll of honour remembering the many members of the congregation who served in the 14-18  war.

This site uses Akismet to reduce spam. Learn how your comment data is processed.